Cracking walls are an annoyance for any homeowner.  Some cracks can be easily spackled and sealed without the need to call in the professionals, but other cracks are a result of a more serious issue, and will therefore require more serious repair efforts.  Minor wall cracks will often occur in your home’s drywall or plaster, and are caused by: 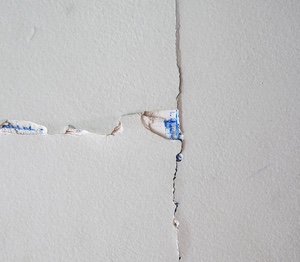 Drywall cracks like this are often minor and not a result of foundation failure.

Wood frames in many older homes expand and contract when the humidity rises and falls. This, in turn, puts stress on the plaster or drywall, eventually leading to cracks.

Older homes used standard plaster walls instead of the more durable drywall used today. As it ages, the plaster has a tendency to sag as it comes loose from the lumber frame behind it. The ensuing stress causes the plaster to weaken, causing it to crack.

Your home will continue to settle on its foundation for decades after being built. As your home shifts, cracks occur; while these cracks are technically a structural weakness, they alone pose very little threat to your home’s structural integrity.

On the other hand, if you have wall cracks in your concrete basement, foundation, or exterior facade, they’re likely being caused by foundation failure or a foundation that has begun to fail. Left untreated, several serious issues can result, including bulging or bowed walls, sagging ceilings, and even complete structural collapse. These structural cracks are often caused by: 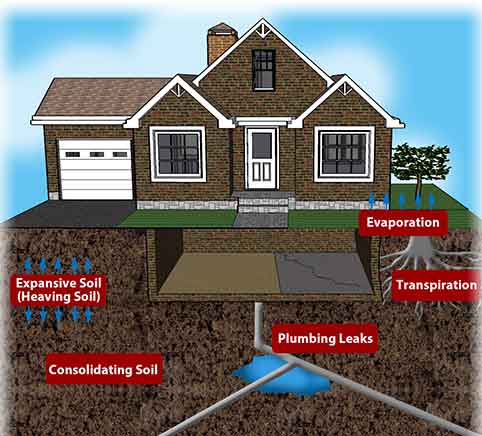 What’s causing your wall cracks? There are several possible culprits.

When your soil becomes overly-saturated, it takes on additional weight and force that it didn’t have before. Now the soil that was simply resting next to your foundation is actually pushing against it with a strength great enough to destabilize it. Your soil can become saturated from a number of different water sources, including broken pipes, improper rain drainage, a high water table, significant rainfall, or a lawn that slopes towards the home instead of away from it. If you suspect that your wall cracks are a result of soil saturation, there are a number of solutions to reduce the likelihood of future problems by diminishing the saturation levels directly next to your foundation. Refer to my earlier blog, Don’t Let Wet Seasons Water-log Your Foundation for some tips.

Soil shifts naturally, so if your foundation footers were initially installed on looser material, they might shift over time as the soil settles beneath the weight of your home. The shifting soil places a lateral force against your wall, forcing it to crack. Many homes in the U.S. are built on clay soil, which is highly expansive when wet. While the soil expansion itself can cause some damage to your foundation and walls, the real damage comes when that expanded soil dries out and contracts. 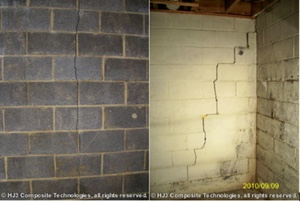 When your wall cracks occur in foundation blocks, you’ll need a structural repair.

External Loads From Driveways or Patios Near Basement Walls:

Extra weight from driveways and patios, as well as the people, vehicles, and furniture that often use them, can put additional pressure on the soils beneath and around your home. The compression often forces the soils against your basement walls, exerting more pressure than the wall is used to handling.

Even if you have a tree or shrub that isn’t placed directly next to your foundation, the plant’s long-growing roots can still exert significant pressure against your basement wall, forcing it to crack.

The problems and causes of wall cracks, both minor and major, can be avoided or remedied with a surprisingly simple reinforcement technique. StrongHold™’s carbon fiber Cracked Wall Repair Kit structurally confines your wall cracks, providing enough strength to stop the problem that caused them in the first place. Our innovative repair system gives the peace of mind you need, without the invasive or financial drawbacks associated with steel repair methods.

Wall cracks like this one are perfect for StrongHold’s cracked wall repair kit.

Want more information about StrongHold™’s Cracked Wall Repair Kits and how they can provide the strength you need without the price tag? Write me today at STRsupport@hj3.com!