When a homeowner purchased this foreclosed property with a severely cracked wall, he knew he needed something stronger than mere crack filler or mortar to repair it. The ¼”-wide crack went all the way through the block wall, and was likely caused by soil displacement. The homeowner needed structural strengthening, and his research led him to StrongHold™’s Cracked Wall Repair Kit. After reviewing the included installation video, he realized that the pre-measured and pre-cut carbon fiber kit would be very easy to install himself. Armed with confidence and The Strongest Name in Carbon Fiber™, this homeowner got to work. 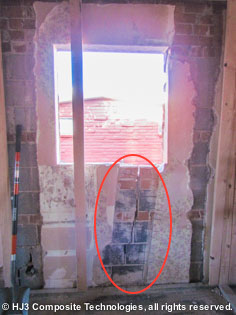 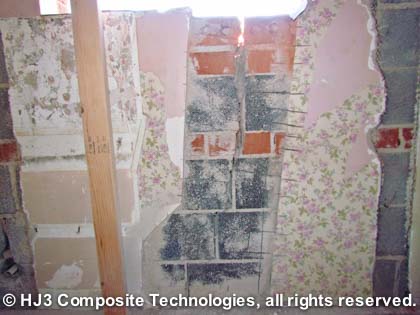 All drywall was removed prior to installing the carbon fiber.

Before applying the StrongHold™ crack repair carbon fiber fabric, the drywall was removed from the problem area. The homeowner used a mechanical grinder to remove all paint and delaminated concrete, and he vacuumed the resulting dust away to provide a clean wall for the carbon fiber to bond to. 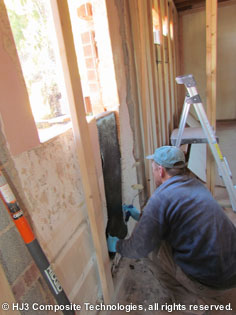 The homeowner wraps his wall with StrongHold’s carbon fiber fabric.

After priming the wall, the homeowner applied StrongHold™’s carbon fiber fabric, which had been thoroughly saturated on both sides with the included StrongHold™ saturating resin. In this case, the crack occurred beneath a window, which had been previously removed; the homeowner wrapped both the interior and exterior of the wall. (Removing windows is not a required StrongHold™ installation step, nor is wrapping both sides of the wall. In most cases, applying carbon fiber to just the interior or exterior provides more than enough bond adhesion and strength to permanently confine your cracks.) 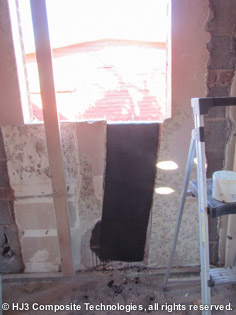 The repaired wall is ready to be re-finished.

While the StrongHold™ Cracked Wall Repair system was still somewhat tacky, the homeowner was able to drywall over it and paint the wall to create his desired look. By repairing his wall with StrongHold, he saved $3,000 and a week of downtime as compared to a repair done with steel. In just a few hours, the carbon fiber repair provided him with a worry-free and maintenance-free strength that will last for decades! With StrongHold™’s carbon fiber, the homeowner gained the structural strengthening he needed, at a much better price. “I would definitely recommend HJ3’s StrongHold™ system,” he says. “It was a simple solution to kind of a tough problem.”