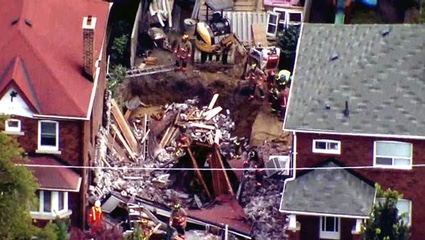 Rubble is all that remains from this Toronto home, which collapsed in September, killing 1. Photo Credit: CBC.ca

The tragic event serves as a harsh reminder that foundation problems are nothing to take lightly.

“This is a problem that’s just waiting to happen to other homeowners who live in structures with inadequate foundations,” says Michael Theriault, foundation expert known as The Crack Doctor. “Whether homes are new or…older, they have to have strong foundations. Without them, everyone is at risk.” 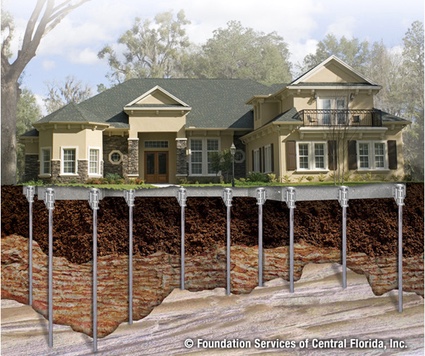 Underpinning is a common practice, used for increasing foundation depth or repairing failing foundations. Construction companies use a variety of underpinning methods, and it’s unclear as to which method was used in the case of Toronto’s collapsed home, but the general idea of underpinning is to re-distribute the home’s weight to a stronger surface, be it more compacted soil, deeper or wider concrete, or, in extreme cases, steel screws and brackets dug deep beneath the existing foundation. It can be a messy, complicated, and dangerous job if the correct precautions aren’t taken.

Unfortunately, it seems that those precautions weren’t adhered to in this case, which makes it even more tragic. Foundation inspections are required at certain stages of work, but according to Bruce Hawkins, Toronto City Planning spokesman, no inspections had been performed on the home, and in fact, hadn’t even been scheduled. The building permit  was issued on August 12, but an inspection appointment had never been made. Maybe if it had, a young man wouldn’t have lost his life, and a family wouldn’t have lost their home.

Four people were in the home when it collapsed. One man was trapped in the basement, his legs pinned by a steel beam. Rescuing him required firefighters with airbags and jacks to lift the debris before he was taken to the hospital. Another man standing outside the home was also injured by falling brick as the home crumbled. 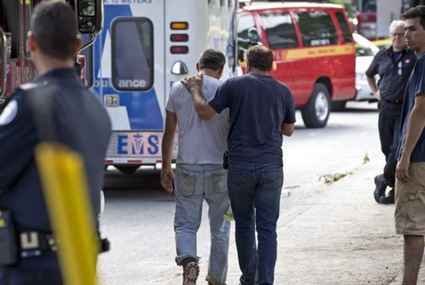 Men console each other after an ambulance carries an injured worker to the hospital. Photo Credit: The Star

There are approximately 60 million basements in the United States today, and an estimated 3-4 million of them require some sort of strengthening. Unfortunately, many homeowners are completely oblivious to their foundation problems, and every day that passes without repair puts them more at risk of total collapse. According to The Crack Doctor, “even a small crack can cause a huge issue in very little time.” If foundation problems are caught and repaired early, however, a huge majority of the risk and repair costs can be avoided.

For symptoms of a failing foundation, and what to do about it, refer to my blog, “Tell-Tale Signs of Foundation Problems”.