Home Improvements on the Rise 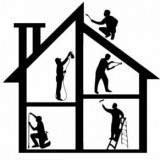 It’s no mystery that home values and home remodel spending have declined significantly in the last several years. Contractors and homeowners alike have struggled to keep their heads above water as foreclosures and a declining economy have taken over the housing market. But good news has finally arrived! Home values are increasing, which means homeowners have more equity and financing options available for home remodels. In fact, census trends indicate that home remodel spending is at its highest point in several years. As HJ3’s StrongHold Product Specialist, I’ve seen first hand just how busy home contractors have been this season. And while housing statistics and home remodel trending reports indicate that the rise in home improvements will start to ease going into 2015, the projections for 2015 are still far above what we’ve seen from the past few years. 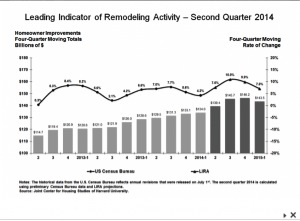 “Revised estimates from the US Census Bureau show the home improvement market grew by 5.6% in 2013. For 2014, the LIRA projects annual gains in home improvement spending of 9.9% with annual growth slowing to 7% in Q1 of 2015″. Although this does suggest a leveling-out effect in early 2015, the “LIRA continues to project significant spending going into 2015.” Credit: Joint Center for Housing Studies of Harvard University

Harvard University publishes a Leading Indicator of Remodeling Activity (LIRA) every quarter.  The report is
designed to estimate national home improvement spending trends for the current quarter, as well as for the three subsequent quarters.  The most recent LIRA, published on July 24 of this year, identifies strong remodeling trends that indicate that home remodeling will peak in the latter half of 2014.

Homeowners spent $130 billion on remodeling projects in 2013, according to the U.S. Census Bureau.  It’s the largest amount of home-remodeling spending since the housing downturn began in 2007.  Permits for remodeling jobs in the US rose 5.1% last year from 2012, which is the largest increase since the figures began their rebound from a 10-year low in 2010.

U.S. Spending on renovations is at its highest since 2006, and median home values are at their highest since then as well. Credit: The Wall Street Journal

While remodel spending is rising, new-home construction has slowed, which indicates that a growing number of consumers have decided that upgrading their home may be a better investment than buying a new one.  Rising home values have made it easier for homeowners to get financing for their home improvement

projects; rising home values has created more equity for many homeowners.  Furthermore, homeowners who previously may have owed more than their home was worth, now have a positive standing and are therefore eligible for home improvement loans as well.
So what does all of this mean for you?  Well, as a homeowner, it means that now is a great time to start putting all your home remodel plans into effect.  While remodeling when contractors are especially busy is not ideal, the period of time just after the busy season will be your best opportunity to have your project completed on time and for the best cost.  I compare it to Halloween shopping – the best deals on decorations and costumes always come right after Halloween is over.  By choosing to complete your project in the fall or even winter, the contractors have just come out of a very healthy season and will have both the motivation and capital to get your job done right.

Interested in getting those home improvements started?  Don’t forget about fixing your bowed or cracked walls!  Contact me at info@hj3.com for more information.